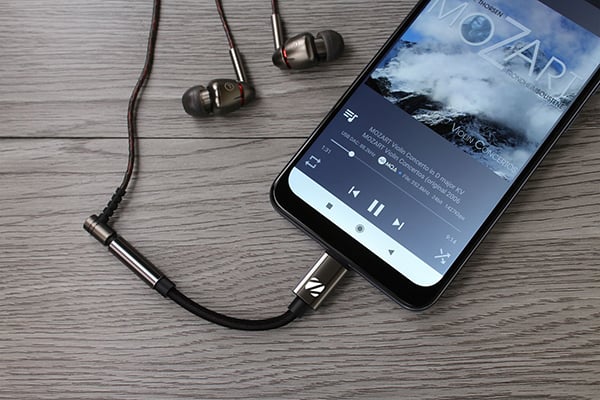 Upgrading your music listening experience has never been so easy. With the Ztella USB-DAC, it is simply plug and play. Connect to your phone and headphones, that’s it! You are now ready to enjoy high definition audio from PCM 384K to DSD 5.6M. Did we mention MQA (Master Quality Authenticated) audio rendering support? Rock your Tidal Masters or Xiami (虾米音乐) music and chill.

Ztella is the smallest USB-DAC with high-end audio capability that sounds great and is small, simple and efficient. It is the only accessory that you’ll ever need to enjoy ​great music. ​It delivers a balanced, clear and articulated sound in a wide soundstage. The availability of HD Audio streaming is raising the expectation of audio quality and Ztella is designed to change the equation and bring HD audio enjoyment to the mainstream.

Zorloo Ztella is a conversion cable with built-in high-end decoding function. One end is USB Type C and the other end is 3.5mm headphone output. New Android phones and computers are ready to plug and play. The package also has a conversion plug. Type A plugs are used for computers. Powered by USB, plug-and-play can be used without additional power. In addition, the casing is made of aluminum alloy. The body is covered with a woven net. It weighs only 5g. The small socket makes it extremely convenient to use with a mobile phone.

Although Ztella is just a small conversion line, like many DAPs, it has a built-in ESS Sabre decoding chip. It also uses the new model ESS9081CPRO. It not only supports 32bit / 384kHz PCM, 5.6MHz DSD, but also supports MQA decoding. If you use a computer, With programs such as Tidal and Audirvana, you can play MQA music. If you use an Android phone, you can also support MQA after installing the app, and play the highest standard digital music on the smallest Ztella. In addition to the decoding function, Ztella also has a built-in earphone function. The maximum output can reach 2Vrms, which is twice that of common mobile phones and computers. Ztella will also automatically detect the impedance of the headphones to adjust the gain, and satisfy each pair with the optimal output level. headset. Whether it is paired with a mobile phone or a laptop computer, the analysis power and spatial sense of the headset have been significantly improved after using the Ztella. Bring too much sound, so that everyone can hear the performance of a pair of headphones.

Ztella’s support for headsets is also very comprehensive. You can use the headset’s remote control to control the volume, play / stop features, and support the microphone on the headset. In addition to voice calls and recordings on mobile phones, video conferences on computers There will be a clearer effect.

MQA is an award-winning British technology that delivers the sound of the original master recording. The master MQA file is fully authenticated and is small enough to stream or download. Visit mqa.co.uk for more details.​