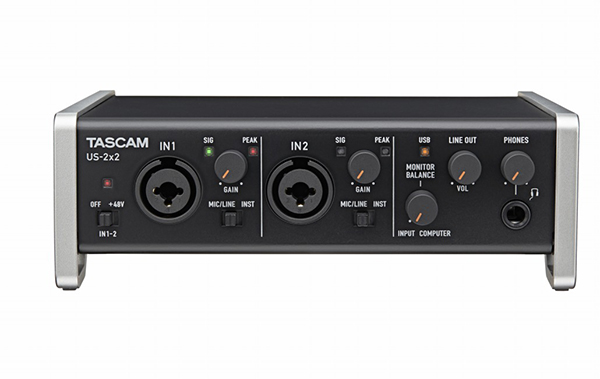 TASCAM’s own Ultra-HDDA mic preamps are the cleanest, quietest, and best-sounding from any interface in their range. A gain range of 57dB makes them ideal for any type of mic – dynamic, condenser, or ribbon. With preamp performance well beyond any interfaces in their price range, the Ultra-HDDA preamps on the US-2×2 makes your tracks sound like a record. 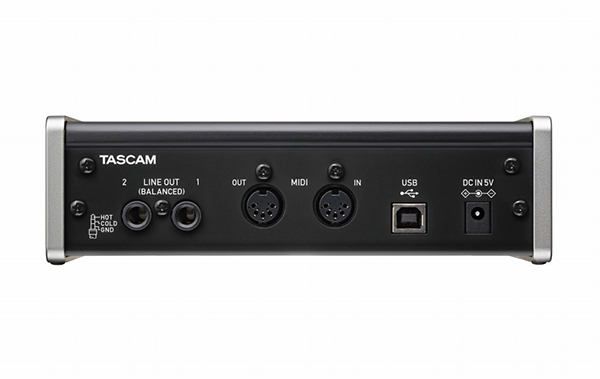 TASCAM makes installing the US-2×2 a snap, whether usnig the built-in class-complient driver or the high-performance ASIO or Core Audio drivers. TASCAM started from scratch on the software, developing them in-house through extensive testing, resulting in our most robust drivers ever.

Also included with the driver software is a simple-to-use on-screen control panel, which monitors and adjusts critical interface settings. TASCAM USB Audio Interfaces Driver (Settings Panel) software for Windows has been updated to Version 4.00, enabling to build music production environments with ultra-low latency that maximizes the processing power of the computers in use. In this new version, the driver’s stability has been greatly enhanced, the audio buffer size is now selectable up from 4 samples instead of older versions with the default buffer size of 64 samples, and overall usability has been improved.

* Version 4.00 functions are limited to Windows only.*

TASCAM’s own Ultra-HDDA mic preamps are the cleanest, quietest, and best-sounding from any interface in their range. A gain range of 57dB makes them ideal for any type of mic – dynamic, condenser, or ribbon. With preamp performance well beyond any interfaces in their price range, the Ultra-HDDA preamps on the US-2×2 makes your tracks sound like a record. 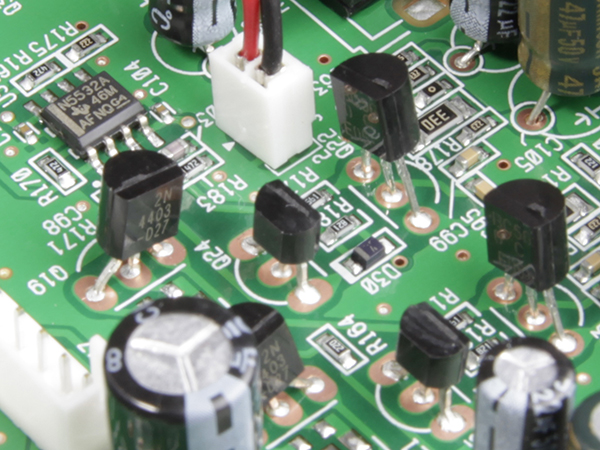 TASCAM’s Ultra-HDDA (High Definition Discrete Architecture) mic preamp design is based on discrete components, just like classic professional gear. They achieve an incredible EIN rating of –125 dBu, meaning their noise level is practically below the range of hearing. Other impressive specs include a signal-to-noise ratio of 101 dB, out-speccing anything in its price range. But instead of judging the design merely by test measurments, key components were selected following extensive listening tests. TASCAM uses proven, great-sounding components throughout the US-2×2. One example are NE5532 op-amps, famously used throughout classic recording consoles and signal processors due to their sweet, musical sound.
XLR and TRS Accept Balanced Mic and Line Level Signals 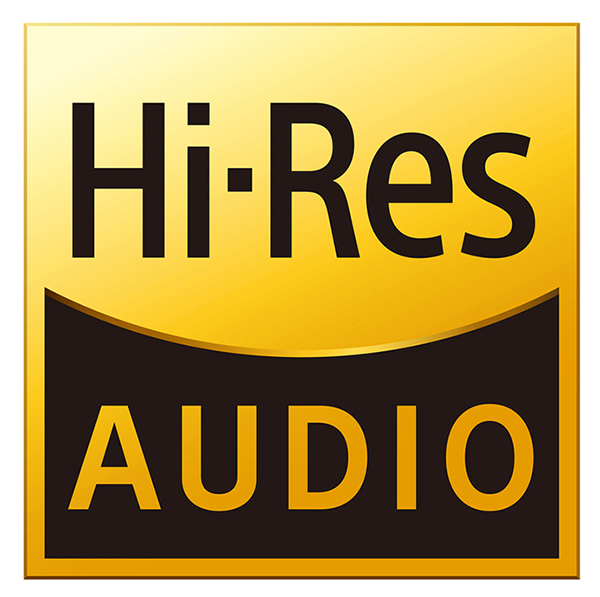 High Resolution Recording up to 96kHz/24-bit

The US-2×2 records all four channels at up to 96kHz/24-bit resolution. Even if your target is CD or MP3, recording at higher resolutions gives you more to work with in the mix and can result in a smoother sound. The mic preamps and A/D converters work together to capture the clearest signal path, whether you work at 96k or at lower sampling rates. 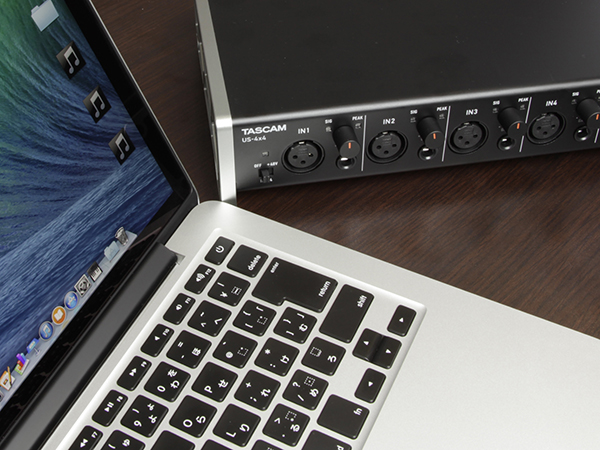 USB 2.0, found on nearly any computer, is used as the interface for the US-2×2. Simply connect the interface to any available USB port to supply plenty of bandwidth, even for multichannel 96k work. (The US-2×2 is also compatible with USB 3.0 ports.) Driver Software Can Be Pre-Installed Without The Interface

The US-2×2 Windows driver software can be installed without connecting the interface. Simple on-screen instructions walk you through the installation. These interfaces can be used on a Mac without installing a driver, but we recommend installing the software to use the control panel. 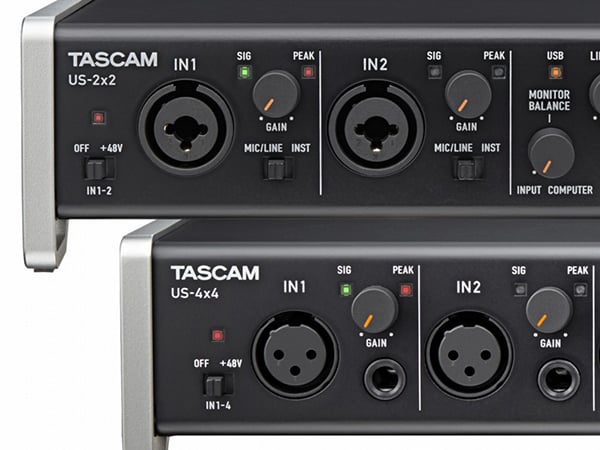 Non-powered mics like dynamic and ribbon designs can sound great, but they also have a lower output level than condenser microphones. The US-2×2’s Ultra HDDA mic preamps not only feature 57dB of gain, but also a low-noise design so you don’t crank up the noise at the same time. Plug in modern or classic mics and still get plenty of level on your tracks. Rock Out with Amp Simulator Software using the Guitar Inputs

The two inputs can be switched to direct guitar inputs, ideal for direct recording of electric and acoustic guitar and bass without the need for a preamp. 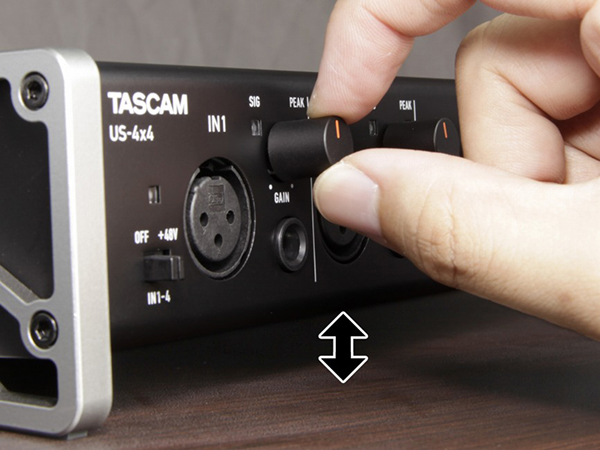 The two Ultra-HDDA mic preamps on the US-2×2 handle anything from rehearsals to studio recording, to live performance. Capture an entire band, or just mic up a drum kit. The two TRS jack outputs can feed monitors, signal processors, or video cameras.
The US-2×2 includes an AC adapter – also required for use with iOS devices. By using an audio interface with iPad sound sources like a synthesizer app, a richer sound quality can be heard as opposed to using the headphone output alone. 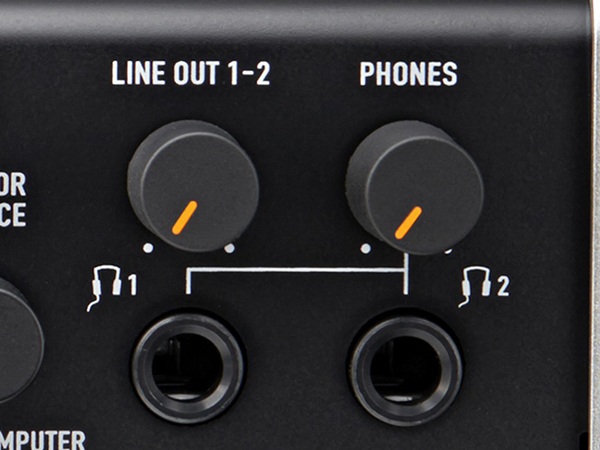 The US-2×2 includes both headphone and line output volume controls. Even when both powered monitors and headphones are connected, the user can set an optimum level for each during operation. And when you want to work on headphones, you don’t need to reach around to switch off your monitors. 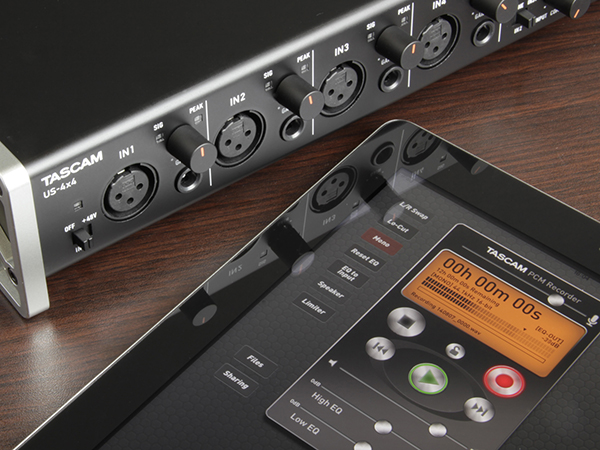 Connect to iPad, iPhone, or other iOS devices

Use Apple’s Camera Connection Kit to connect the US-2×2 to an iPad or other iOS device. Utilitze the multichannel audio and MIDI functions with any of the thousands of iOS audio apps, like Garage Band or TASCAM’s Portastudio app. Class Compliant drivers also allow the interfaces to be used with Android and Windows-based tablets. 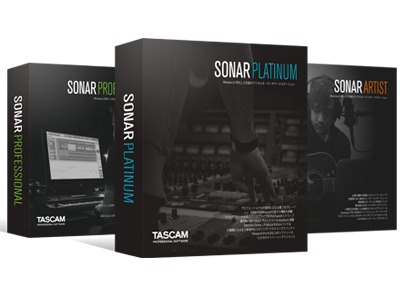 TASCAM has tested the interface operation with all leading DAW software, such as SONAR, Pro Tools, Cubase, Live, Studio One and Garage Band. Use the interfaces with your favorite Mac or Windows recording applications, not just the bundled apps. 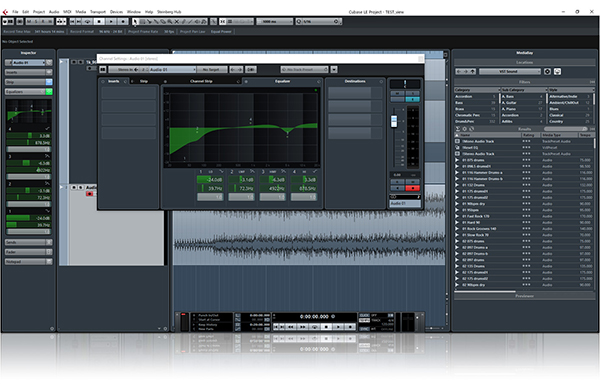 Cubase LE – An advanced DAW for Windows and Macs

With Cubase LE you can turn your Windows or Mac into a beautiful and easy-to-use music studio. This compact DAW offers you all the basic tools for recording, editing and mixing everything from the initial musical idea to the final track. Cubase LE assists you during the creative process – whether you are a songwriter, guitar player, vocalist or electronic music producer, Cubase has the right tools and features at hand. 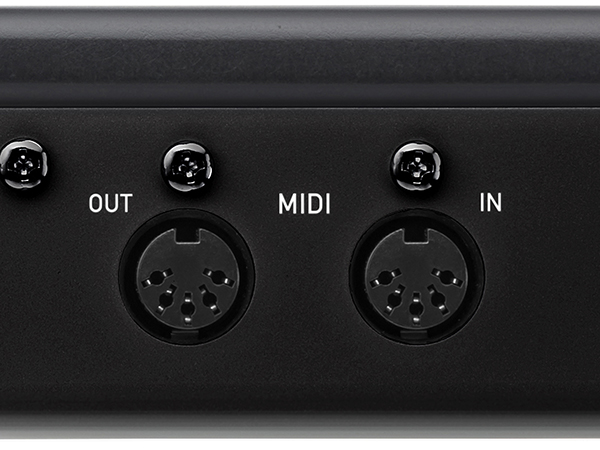 Standard MIDI input and output connectors allow connection with the thousands of keyboards, drum machines, controllers, and other sources that employ MIDI connectors. The interfaces can also be used for synchronized operation of multitrack recorders and other external recording equipment.